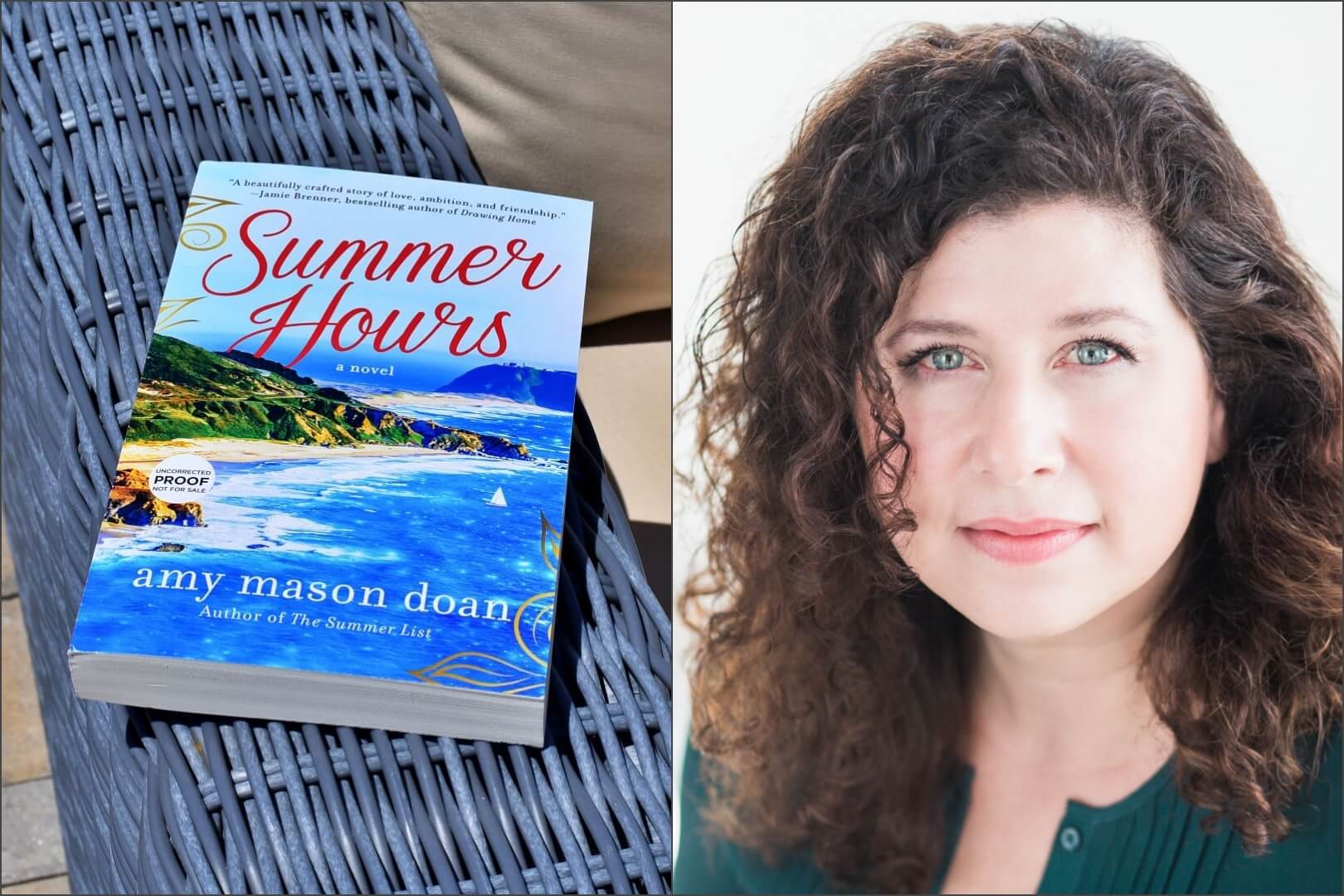 Amy Mason Doan is the author of Summer Hours and The Summer List. Let’s get to know Amy more!

Amy Mason Doan grew up in Danville, California and now lives in Portland, Oregon. She’s written for The Oregonian, San Francisco Chronicle, Wired, Forbes, and other publications. Amy has an M.A. in Journalism from Stanford University and a B.A. in English from U.C. Berkeley.

Jane Eyre, Independence Day, Amy and Isabelle, Crossing to Safety, Claudine at School, The Prince of Tides, The Heart is a Lonely Hunter.

Probably ever since started reading. I was a confirmed bookworm and escapist, like most authors. But I wanted it so much that I was afraid to try. I was an English major, then went to journalism grad school, and had a satisfying career as a newspaper and magazine reporter/editor for decades. I didn’t have the guts to write fiction until after I turned 40. That was a wild year when I met Judy Blume via a random Facebook contest, and it inspired me to sit down and write. It’s still surreal to me to see my novels on shelves.

Can you talk about the story inspiration behind Summer Hours?

It’s my feminist homage to The Graduate. I wanted to write about those pivotal years right after college, when we’re floating and overwhelmed by choices, by the unknown, and our friends are our lifelines. Becc, the main character, is driving up the coast to a wedding with an unnamed passenger, and she flashes back to the summer after college that changed the course of her life – her career, her friendships, and her image of herself. On the surface, she was only choosing between her oldest friend Eric, who had carried a torch for her for years, and her sexy older lover Cal (the father figure he detests). But she was also torn between cynicism and idealism – and still is, as a grown woman.

When I was at Berkeley, I lived across the street from the infamous fraternity house in the movie version of The Graduate. I’ve also been a die-hard Simon & Garfunkel fan since I was ten, so I’m sure that also influenced me, since they wrote the soundtrack to the film.

What do you like the most about writing contemporary fiction?

Half living in another world. That doesn’t happen right away, but when the story has matured enough and the characters are such old friends that I can screen it in my head like a movie, it feels utterly real.

I also love it when readers reach out to say that one of my novels touched them, or made them cry or laugh, or pick up the phone and call a long-lost friend. That’s happened a lot, since both THE SUMMER LIST and SUMMER HOURS are, ultimately, about priceless old friendships.

Are any of your stories based on real people and/or events?

Absolutely, although I won’t say who the less-than-flattering portrayals are based on, for obvious reasons! And many of my characters and events are composites of real people or inspired by my life. I was never forced into an adult scavenger hunt like Laura and Casey in THE SUMMER LIST, but I did spend my summers in Pinecrest and Tahoe, so the lakeside setting in the book is based on those sweet memories.

SUMMER HOURS is much more autobiographical than THE SUMMER LIST. Becc is an idealistic young journalist who sneaks out to the movies during the workday to escape reality. I did that (sorry to my trusting employer!). Dereck Schwinn in SUMMER HOURS, the lecherous “footsy king,” is a composite of some of the men I knew in Silicon Valley, when I worked at a business magazine for a few years. There’s someone in SUMMER HOURS who keeps blue M&Ms on a dish on his work desk, labelled “Viagra.” Well, tweak that to blue jelly-beans and it’s an event from my life.

Can you give any hints regarding your next novel?

It’s about a woman named Jackie who inherits her uncle’s rambling, legendary property on the wild Humboldt County coast in California. He was a musician who entertained huge groups of free-spirited visitors at his home/recording studio, and she spent a life-changing summer with her cousin there when they were 17. She and her cousin have kept a secret about that summer for 20 years.

I can also say that one thread of the plot takes place in 1979, and that there’s a diary involved. I’m in love with the story and characters. Graydon House will publish the novel in 2021.

What are you currently reading and what’s your TBR (to be read) list?

I read Ann Patchett’s The Dutch House and loved it, and I’m dying to read I’m reading Olive, Again by Elizabeth Strout. I’m reading a ton of non-fiction right now – The World in My Eyes, the music memoir/autobiography of DJ and radio host Richard Blade, and several books on the Romanoffs and the fall of Petrograd. I’m pretty obsessed with the Russian Revolution right now. I can’t read a lot of fiction when I’m in the depths of my own writing or revision, as I am currently. It’s too distracting and I don’t want to accidentally parrot someone else’s style. I’m also binging on cable shows – The Handmaid’s Tale, Mrs. Fletcher and Succession.

Thank you Amy for participating in the Q&A!

Click here to order the Summer Hours on Amazon.

How to Start the Best Book Club Ever